An Interview with the Mitchell Brothers 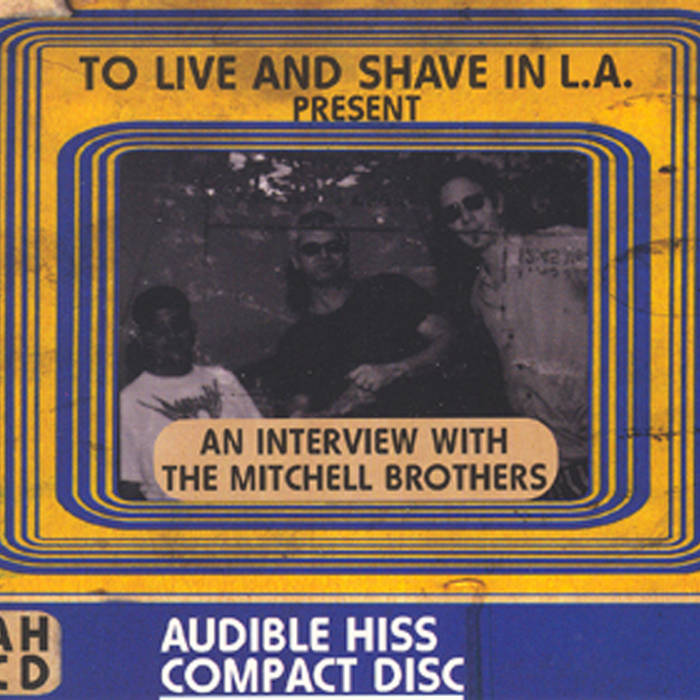 The fourth TLASILA album (at least from a chronological perspective), An Interview with the Mitchell Brothers was created in a single day (August 11, 1995) in response to a dare issued by Sir Ned Hayden of the august Audible Hiss imprint. Using Kenneth Turan's invaluable 1980 reference work Sinema: American Pornographic Films and the People Who Make Them as my primary template, I dashed out ten lyrics and edited the cut-up backdrops over which Ben and Rat would shade and abrade. We hit record, tracked the lot, and then the boys cleared out to prowl the night. Meanwhile, I mixed until morning. There was no mastering stage - we went straight from studio to CD-R (which took about two hours to burn in those hoary old days). Ned had asked us to deliver a 45-minute album, so we had to leave off "Desires for Men" (the songs on the album took their names from titles of films directed by the ill-fated Artie and Jim Mitchell); "Desires" eventually appeared on the Les Tricoteuses album (which was completed in 1996 but remained unissued until 2008, when Savage Land stepped in to suture the breach to temporality.

Syd Garon's design for the Mitchell Brothers digipak featured a cover inset photo of the titular siblings, and stills derived from the films referenced in the album's song titles. Caroline's lawyers flipped when they saw the artwork, and demanded we make changes. A compromise design was assembled and accepted.

An Interview with the Mitchell Brothers was issued as Audible Hiss CD 012 in October,1995.

The Mitchell Brothers did the spoon 'n snatch stupor to death, jamming the flues of filth-film floozies like there were no brain-burst and grapeshot-spackled tomorrows, making it easier for the muff-puffing mavens of today to assfuck faster. And while boffing isn't new, there are a doomed few listening to banging on burning Frigidaires, and they think that they're hearing the future. While these simpletons would serenely sit, sewn to their bone(rs), trying to get off on a continual car crash, the Shave is loading up the water-cooled Browning and blasting eight prostates full for the trapezoid-bound amidst prison camps and "collapse." It don't take Bo to know noise blows, and Jesus, face it, 'prov lite's a blight. I'd rather be bobbing for nipples with Rustie Rhodes than listening to even Gruppen-flecked Aube orchestras, so fuck, the firey sconce of truth is found flickering within floppy flesh, not the feedback of the Ape of God. It has been definitively done, girlfriend, and with the sad-ass clamor-glut piling up about our heads, To Live and Shave in Los Angeles throw off their Yakuza-ear necklaces and sagely opt to hump a higher level. Their acrid spew doth recall hate-lanterns of cum-splotched, Blue Collar'd Yaphett Kottos, splintering kneecaps of Pain Jerk and Noggin buffs with Osaka Sluggers fashioned from the pelvic arches of anti-midrange Bioncas. Interview heists Helen Butte's Mizrahi-gummed speculum and bats serrated spite-balls into the fucked-out cervix of noise orthodoxy (Or, crams a caustic catheter into its purulent urethra...gotta be fair, dickless). Nonetheless, many fools still hold a tattered-ear standard as Old Glory, while a faint, falling scumbag star tries to father the failing freeform squall line on a pointless cred crusade, but The Hanatarash - whose Bennett/No Dick didn't totally suck - probably sold only like three records (to the same three jerks) anyway, so why bother? Amped air conditioner hum. Even Masonna's hair dryer rocks harder. They shall taste Grant's Tomb like just another Unknown Hoon with a Hoover strapped to his head, foolish as the faggot from Helmet. Yeah, I said it. And no more goddamn Ayler rips! White boys cannot hang! Sell your horns, trade your ESP vinyl for some Cleopatra discs, shoot up some eyeliner, revel in your mediocrity! You can never top Spirits Rejoice - give up! And please - no more pallid Merzbow fizzle! The shit is geriatric! Loud? Yes. Annoying? Yes. Innovative? Right up there with Candlebox, baby. RRR is Polydor Nashville. To Live and Shave can think for themselves - what is your genetic defect? They're a fur-lined Xenakis '59 (with L. Nyoukis' pink-dyed quim in place of face-hole), you're Rick Wakeman opening for Rusted Root, move the fuck over! Then again, fuck the Shave! They're bound to go Sonic eventually, doin' some pathetic Maytag shit like "Noise Symphony" in '98 on Blanco y Negro with Mike Watt producing, so kill Tom Smith NOW! Destroy EVERYTHING! Last really great album? Humble Pie - Rockin' the Fillmore! Death to Blowhole, long live Blackfoot!

Engineered at The Studio, Miami, on August 11, 1995 by Rat Bastard (bass guitar parts) and Tom Smith (the rest).

Mixed and Produced by Tom Smith.