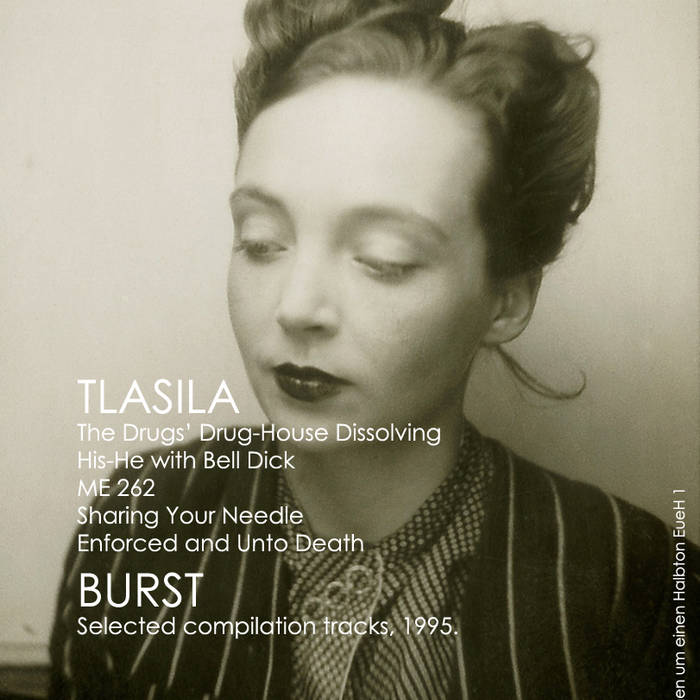 Straining against the template.

With the release of 30-minüten mannercreme, Vedder Vedder Bedwetter, An Interview with the Mitchell Brothers, three seven-inch singles, three cassettes, and "Helen Butte" vs. Massona Pussy Badsmell and (the original, abandoned version of) Where a Horse Has Been Standing and Where You Belong already completed, not to mention a 29-song rough mix of The Wigmaker in Eighteenth-Century Williamsburg in the can and undergoing analysis, To Live and Shave in L.A. veered far left and parsecs deep. By the end of the year, their (profoundly damaged) cassette loop backdrops were being phased out in favor of a bare palette more suitable for hysterical improvisation. (Which, through no fault of the group, soon became known as "free-glam.")

Labels began to request submissions for compilations, and To Live and Shave in L.A. obliged when aesthetics seemed relatively mutual. The five pieces assembled herein offer a precise (though far from comprehensive) overview of their shift away from acidic cacophony to a determinedly narcotic phosphorescence.

All selections recorded and produced by Tom Smith at The Studio, Miami Beach, 1995.

"The Drugs's Drug-House Dissolving" first appeared on Fifth Column's Forced Cranial Removal collection. From TLASILA Blog: "Original elements from Vedder Vedder Bedwetter's "Shits Upon the Debris and Burns" were re-configured to create the template. Five new vocal layers, each with its own set of lyrics, were then added." Strange bloody bedfellows.

"His-He with Bell Dick" was sent to Hitomo Arimoto's Beast 666 label after TLASILA received his request for a track to be included on the Prayer Is the Answer cassette. The DAT master arrived too late to be included on the compilation (no Internet uploading at speeds greater than dial-up in 1995, remember), and was left mouldering in the Shave archive. "His-He" began life as "And Hammer, the Crown of Thorns" from Vedder Vedder Bedwetter.

"ME 262" was one of Tom Smith's favorite songs from Blue Öyster Cult's sepulchral 1974 album Secret Treaties. When Bulb Records commissioned a track from TLASILA in the summer of '95, Smith hit the studio with Bill Orcutt and BÖC's cheery Luftwaffe tribute was brought closer to oblivion. The compilation never materialized (at least to our knowledge), and the Shavian rendition was relegated to the void.

"Sharing Your Needle" was created in response to a request from Prick Decay for a remix for their Mic Gravy for Freek album. Dylan Nyoukis rejected the submission, as the version sent to PD featured vocals and was deemed to be somewhat off-topic. Pity. At least five versions of "Sharing" exist in the TLASILA archive - a plaintive (!) ballad (!!) with an exquisite lyric and primitive, open-tuned guitar (!!!) by Tom, the song used Guidelines for Basement Non-Fidel's "Equal Amounts Meths and Soda" as its foundation. Rude tape edits stutter the track's initial bell peals, and subtle dub effects soon take over, reflecting the lyric's narcotized theme of amour fou. The version here is an instrumental take, sans guitar, but adding a Moog pulse underneath. One of TLASILA's many exiled treasures.

"Enforced and Unto Death" was originally intended as the lead-off track for To Live and Shave in L.A.'s completed, then abandoned 1995 version of Where a Horse Has Been Standing and Where You Belong. (The released 1998 version of the album was a melange of aggressively befouled cut-ups and bore no resemblance to the original compendium.) "Helen Butte" vs. Masonna Pussy Badsmell's "Tina Russell, Free" provided the exoskeleton for the track, which was, under that name, eventually lent to the Ignivomous label for their Easter, Puberty & Amplifiers comp EP.

So, five rapturously out tracks in total, three of which oozed up from the archive and were previously unreleased - until now.

Mixed and produced by Tom Smith at The Studio, Miami, from June-November 1995.