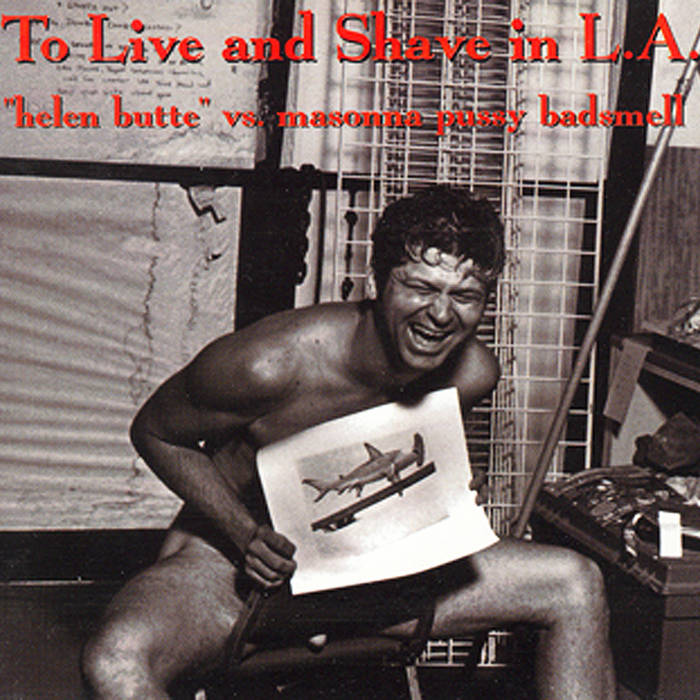 (Well, to be transparent and precise, James Marlon Magas, who in '94 was managing the label in the absence of Bulb founder Pete Larson, asked us to create the album. Larson, if memory serves, was away in Japan, and had little to do with Magas's A&R decision.)

We recorded it at Sync Studios, Rat Bastard's second (or third) of several Miami Beach studios he ran with partners Looch and Ralph C. (I also tracked parts of it at Telemundo, the Spanish-language television network where I was employed as an audio engineer. Most of the Telemundo stuff was done in '93; at their studios in that same year I also edited and EQ'd Harry Pussy's debut Siltbreeze long-player, In an Emergency You Can Shit on a Puerto Rican Whore, and assembled the first, eponymous After That It's All Gravy collection. )

"Ass God" and "Heavy Bribe" were recorded live at Churchill's, Miami, in the Spring of 1994.

[By glutenous admission I find the latter track to be almost wholly bereft of logic. The album, in either the best or worst sesnes, was genuinely irrational... It seems rather ahead of its moment, yet somehow sprung from the loins of load-bearing mammals. Were we but sumpters with overactive cerebra? Oxen with near-encyclopedic knowledge of the lives of pornographic actresses of the early 1970s? 'Tis true, a certain blogging donkey was getting a good deal of tail at the time of the album, but hubris was oh-so-fleeting, and a humbling collapse was just around the foot of the unvarnished sleigh bed. See Wigmaker for details...]

"Helen Butte" vs. Masonna Pussy Badsmell was eventually issued (or, dumped into the cutout bins, depending on the cynical depths of one's perspective) by cash-poor but tax write-off savvy DC indie Fifth Column, under their short-lived Full Contact imprint. Michael Bull, one of the label directors at Caroline Distribution, later informed me ('97-ish) that Butte had Soundscanned an astounding 72 copies.

Those of us manning the bilge hydrolics at TLASILA HQ reckon few of you have heard the damned thing, so please, download! Spread it around the Usenets, burn it for easily aggrieved neighbors, bootleg it into emerging redoubts, etc.

Remastered, remixed (most of the tracks were in some way tweaked), and otherwise reconsidered by TS between June 27 and June 30, 2006.

Mixed and produced by Tom Smith..

(Except "Television's Over," composed by Tim (TV) Smith of the brilliant, ever-relevant Adverts.)