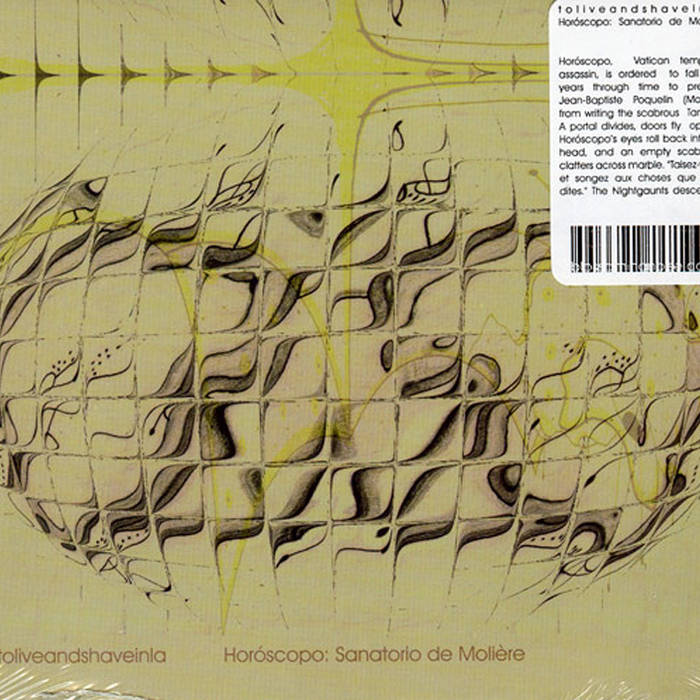 After an insane gestation period marked by the usual hellish fits and starts, Horóscopo: Sanatorio de Molière, the comprehensive, in-house remix/deconstruction of at least a decade's worth of To Live and Shave in L.A. recordings, was finally wrapped today. (Less than twenty minutes ago, to be precise.) Horóscopo began as a fevered reverie atop Dave Phillips' DJ decks (in Aarau, Switzerland, during World Cup 2002!), reached back to field recordings made on the road in the mid-90s, and drew from almost all the officially issued TLASILA releases from 1994 onwards. I've been tweak-checking since Saturday, but I had to let go of it today. It's as done as it's ever going to be, and I'm anxious to turn it over to Graham at Blossoming Noise. (There are other albums in production, other projects in queue! Gotta keep moving...)

This is my first experience with the wonderful dense and almost airless sound of To Live and Shave in LA. Their sound really is audio overload of the truest form - sounds, melody, voices and singing come at all angles; quite what it all means I’m unsure, but it certainly keeps one's attention and works as great delirious audio acid trip.

There seems to be some sort of story/concept behind it all (this from the press release) :

Which to honest is just as odd and bewildering as the sound of the album itself, so the best thing to do is just let it all rush out at you like a sped-up film as your ears pick out strange melody flourishes, weird mumbled diloguloge, and every other sound element you can think of. This truly must have taken hours upon hours to construct, but this isn't just random audio rubbish piled on top of each other - there seems method to the madness, but quite what it is is unsure. Seemly using elements from their older material, among other things, to make the album... You almost feel like your part of some strange sound experiment, or maybe trapped inside one of those old Victorian machines that were meant to make the mad sane; strapped into a seat, images whiz by and by at seemly faster and faster speeds.

Really I’ve not heard anything quite like this before maybe the closest comparison would be a Nurse With Wound collage track on speed. But, To Live and Shave in LA very much have therir own take on chaos - whether any of it makes sense is another thing, but I’ll enjoy trying to figure it out over the coming weeks.

All that’s left to say is if you enjoy sound collages with a distinctive odd air, apply here. To hear sample tracks and buy direct go here .To be even more puzzled and confused, go to the band's website here.

This incarnation of TLaSiLA features: Tom Smith, Rat Bastard, Ben Wolcott, Don Fleming, Mark Morgan, Andrew (WK) Wilkes-Krier, Chris Grier, and Thurston Moore. The music is such an authorless tangle, it’s impossible to parse who contributed what; I can only say that if any of those names pique your interest, you will not be disappointed.

The cover art of the digipak is particularly eye-catching, and I spent a good five minutes staring at it before I realized I had yet to hit play. Track One opens on a collage of death rays, cut-up conversation/crooning, and a little late-night piano melody, all woven through an increasingly pervasive tone-riff. The frequency is always in flux, as this fucked-up radio won’t stay tuned, dialing-in nearby planets and cable satellites. Two intros on a verse and a swarm of digital gnats, the radios continue to shifts, and a glimmering beat actually develops among the alien pulses and bleeps. Streams of liquid spurt through the soundscape and this is all very surrealist. Armies of sound continue to enter at random through track Three, now as a brassy overture bleeds into a traditional minimalism akin to Terry Riley’s live recordings (‘Olson III’ comes to mind in particular). Nothing lasts long on this album, and soon a whole new barrage of transmissions blast through, laced with static and cosmic timbres. Four opens and closes with an exceptionally stimulating series of vocal samples, book-ending a mudslide of thick, greasy rudeness. Either the album becomes more consistent by track Five, or I have just grown accustom to the patterns of randomness, but a theme apparently emerges for each track from this point on; a theme that is introduced early, then slides underneath each successive layer, always audible but more so when new layers are thin or gapped. Seven plays somber like an early requiem, and Eight takes us outside (who knew we were In?) to the sounds of earth-nature, interrupted by what appears to be a five second sample of the history of rock-n-roll, collapsing into a hot, dense little dot.

There are many ways to approach this album, both as a casual listen or a text to decipher; there is certainly too much going on to put into words. This is an exceptionally cerebral album and surprisingly user-friendly, asking no prerequisite from the listener. This is a mature experimental treat for gourmand and novice alike.

These reworked tracks span 15 or so albums from 1991-2006. Cuts are loopy, grainy and crunchy with a mechanical robotic feel to them. Imagine being in a factory with robots shooting laser pens into your eyes. Frequent high pitched beeps keep your hands close to the volume controls with sound clips approaching unbearable levels at times. Some keyboard/piano clips accompany looped and half-eaten vocals, always surrounded by static, buzzing, churning and cyclical, always sounds. The chaos and complexity of instrumentation makes sci-fi seem low-fi. Tom Smith and Thurston Moore could very well be the descendants of men who had to manually sound the alarm. Fine production and use of frequencies often create the sense of real world sounds occurring whirling around our heads. And then you realize its just Andrew W.K. bashing a bottle on your dome...

Recorded, edited, mixed and produced June 2002 to July 2006 by Tom Smith for To Live and Shave in L.A. Narrative elements extracted from TLASILA recordings 1991-2006; interpolated vocal, electronic, and turntable dissolves by TS 2002-2006.