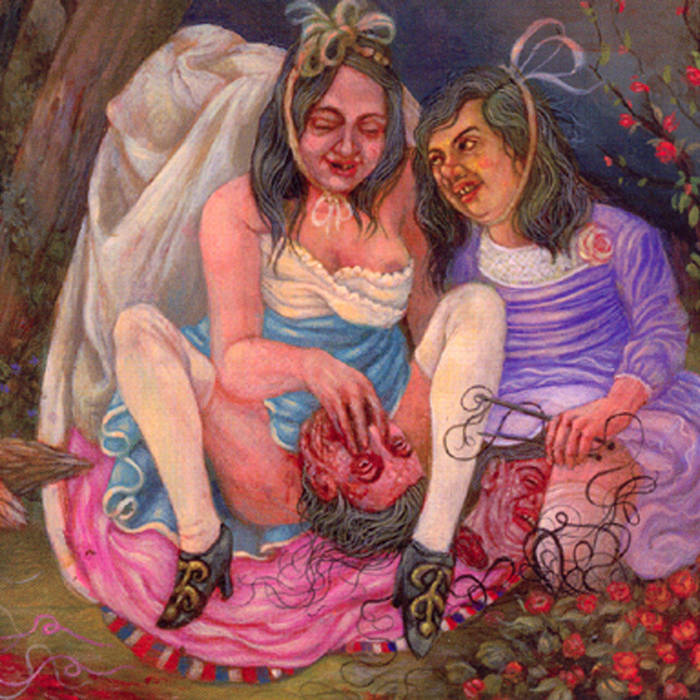 To Live and Shave in L.A.’s An Interview with the Mitchell Brothers, the album written, tracked, mixed, and mastered in a day (on a dare from Audible Hiss president Ned Hayden), was nonetheless researched extensively prior to its August 14, 1995 recording. As the World Wide Web was in its consumer nascence, the bulk of composer Tom Smith’s investigations derived from books found in his own library (especially Kenneth Turan’s 1974 history Sinema), and faded, seldom viewed Mitchell Brothers videotapes rented from an adult film warehouse. From these sources, Smith wove a claustrophobic Todesbericht; the music Ben Wolcott, Rat Bastard and he crafted to accompany the libretto was equally obliterative. The resultant album was dimly received, scarcely recognized at all. With its grim, fratricidal narrative, unforgiving sonic crush, and liner note screed (penned by Ugly American editor Greg Chapman and Smith) declaring genre obsolete and noise passé (remember that this was 1995, long before the culture of din had coalesced or its products and personalities had achieved any sort of mainstream recognition), one can only imagine the bewilderment and disquiet M. Bros. engendered.

Smith was ultimately unhappy with the necessarily rushed effort, and in 1997 sought to craft a textual corollary to Mitchell Brothers. In shifting narrative focus from the San Fernando Valley of the 1970s to the gates of the Bastille in 1790s France, he reversed the gender of his voyeuristic antagonists. Les Tricoteuses was not only an expansive, dubwise reassessment of M. Bros., but an obsessively redacted dialogue about its year-long re-enactment. Thus, the titular conceit, and the layers of narrative foreboding ensnarled within meters of yarn and millions of feet of sixteen-millimeter film.

Les Tricoteuses was to have been issued by the long-dead Climax imprint in late 1997. It has languished in the TLASILA archive for nearly a decade.

Savage Land is pleased to at last present To Live and Shave in L.A.’s extraordinarily rigorous meta-narrative (and, like it or not, noise-dub deconstruction), Les Tricoteuses.

From the review in Heavy Vibes:

August 14th, 1995. Dared by the head of the now-defunct Audible Hiss label, Ned Hayden, to deliver an entire album in a single day, To Live and Shave in L.A. hurriedly gave birth to An Interview with the Mitchell Brothers: a raw, scathing obscurity which (perhaps prematurely) boasted "genre obsolete and noise passé". Despite its 'best intentions', Mitchell Brothers was "a little rushed," and the originally recorded material would have to wait for more than a decade to pass before receiving the proper post-production treatment it deserved . That said, as a part of TLASILA's canon, with its emphasis placed on a hellish, hyper-sexualized meta narrative, and TLASILA's signature convention-snuffing sonics, An Interview with the Mitchell Brothers began to weave the creative framework which would become fully realized in the pre-reformation swan-song epic, 2002's The Wigmaker in Eighteenth-Century Williamsburg. Tom Smith, however, unsatisfied with the unpolished and rough effort, quickly began work on Les Tricoteuses, an album that would reconstruct, remix, and recontextualize An Interview with the Mitchell Brothers into an time-warped, nightmare-dub narrative; shifting the setting from California in the 1970's to the guillotines and gates of the Bastille in 1790's France.

A stunning, semen-soaked example of To Live and Shave in L.A.'s post-reformation aesthetic, delicately regurgitated upon their more youthful, pre-Wigmaker antics, and featuring the classic core lineup of Tom Smith, Rat Bastard, and Ben Wolcott (with additional aid provided by Billy Taylor), Les Tricoteuses' refined dub-noise deconstruction of Mitchell Brothers is not only a dramatic reconciliation between albums, but past incarnations of the group itself. Crafted and skin-grafted from the Mitchell Brothers gutted carcass, Les Tricoteuses presents a series of ten selections that seem as at home with Noon and Eternity's ambient, musique concrète passages as they are with Wigmaker's inferno of cosmic anguish and sexual violence. Here, An Interview with the Mitchell Brothers' narrative and accompanying score are finally given the breadth and space they deserve, as they shock and salaciously oscillate with renewed fervor and rabid foaming mouths. It is impossible to underestimate just how much his work with OHNE has influenced Tom Smith's present post-production efforts, and nowhere is this more evident than in tracks like "Dry Hustle" and latter half of "Bursts Sedate," which find Tom's voice expanding and contracting, filling up gasping and gaping voids across space and time. The performances from Smith's associates are greatly enhanced as well, as Rat Bastard's bass guitar is cut-up and condensed into concentrated bursts of gut-churning riffage, while Ben Wolcott's oscillators shriek and drone appropriately amidst the verbose scenes of heavily amputated narrative and swirling cesspools of fractal electronics looking for love in all the wrong places.

Without spoiling the ending, I'll just say that the plot had me in rapt attention throughout. Les Tricoteuses is the latest chapter in To Live and Shave in L.A.'s ever-expanding canon, and the first of three scheduled releases for the French Savage Land label. Featuring design and cover art by the deliciously infamous Gregory Jacobsen, Les Tricoteuses is more than a casual release of a long-languishing remix project, it's a must-have for longtime TLASILA fans and late-bloomers alike.

Remixed from the original masters of An Interview with the Mitchell Brothers by Tom Smith at Microgroove, Atlanta, throughout 1997. Remixed/remastered by TS at TLASILA HQ, Miami. Artwork and design by Gregory Jacobsen. Produced by Tom Smith for TLASILA.