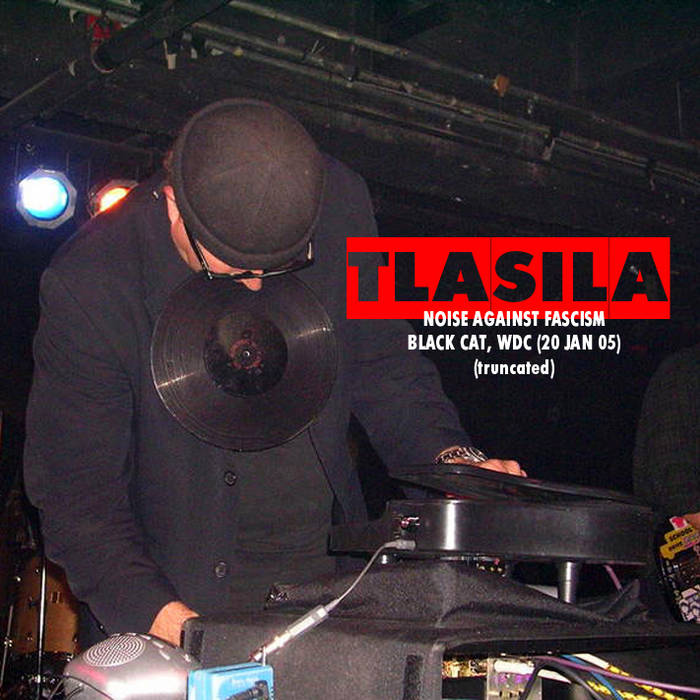 Notes to self: didn't realize it at the time, but Rat was completely fucking wasted by the time we went on. He fell backwards into Don's amp from AWK's initial downbeat, and he didn't stop falling until his train arrived in Raleigh 48 hours later. The stage was under siege throughout the show... Roger from Monotract, Leah from Magik Markers, Max and Twig from Nautical Almanac, one of the nutcases from 16 Bitch Pile-Up... Christ, I lost count. Mic cables unplugged during a third of the performance. No monitors. Ben's amp was fucked by someone in one of the supporting bands. Andrew's electronic triggers didn't trigger much of anything, as those cables had also been jerked from corresponding sockets.

We began with "Percent Obstruct Street," one of the new pieces from the 12/04 Echo Canyon sessions. Audience went spectral shades of apeshit, but as I couldn't make much sense of anything we were doing, I kinda shrugged and wondered what the big deal was.

My own movements appeared to be projected on a similar, mesomorphic outline, a blurred version of myself. Chris, Thurston, and Ben were buried in toxic sludge; Don and Andrew were chewing their lips in deafening 5.1 Dolby.

We followed "Obstruct" with a 4,000-minute (yup) version of another of the December songs, "Mothers Over Silverpoint." By terminus, stage had pretty much been demolished. For the generous audience, however, this seemed to represent the living fucking end. They howled for a very long time. Alas, as the congregation bellows, my belief in the Scriptures nosedives.

Never saw Krist Novoselic upfront, bounding, purportedly, on his twee size-threes. (I only remember a bunch a bearded dudes with cameras, their moist ladies huddled under frilly gingham frocks.) Guy from Fugazi gave me a big hug afterwards, and I was (to borrow a favorite Dave Philips hyphenate) mega-chuffed. (I first met GP in 1984 when Rites of Spring played the same art gallery as Peach of Immortality. Now that, Christian soldiers, was an odd fucking gig.) Never much of a Fug fan (don't think I could name any of their songs; that's no slight, only a reflection of my musical tastes), but I've always thought well of Mr. Picciotto...

As an expression of disdain against a foul status quo, Noise Against Fascism was, on some level, successful. The mainstream media sniffed and moved on. Blogs and boards enjoyed a few days of traffic, after which interest waned... 710 packed into a club which holds 750. Not SRO, but it sure looked as though heads were screwed into rafters. The audience was as welcoming and enthusiastic as any I've seen, and this was gratifying, if not altogether comforting.

(My disappointment and subsequent ambivalence should in no way detract from Chris Grier's achievement; he executed flawlessly. Everyone was paid well, egos were greased, and libations flowed without cease. He ain't TLASILA majordomo for nothin'.)

Captured by Rat from the stage via digital prestidigitation. The recorder was dislodged and switched off during the aforementioned mélée, so this abbreviated version is all that we have in the official archive. Complete video documentation exists, but until such time as we have a copy of our set, this is the best we can offer.