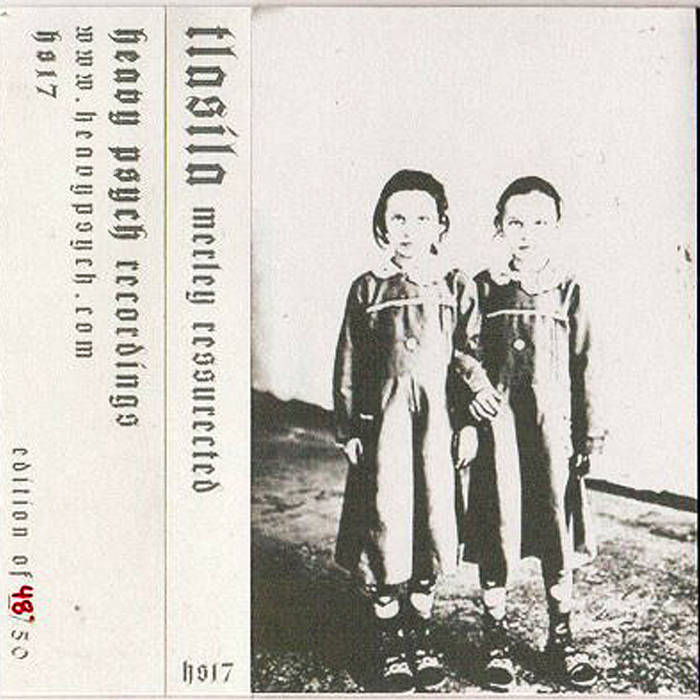 this time out, the group is comprised of rat bastard, gaybomb (andrew barranca), ben wolcott, graham moore (runs blossoming noise), chris grier, tom smith and the mysterious fyntik, which, if tom's to be trusted, is "elvira solodkaja’s pet parakeet". i have no reason not to believe that.

what thee fuck. admittedly, i haven't dove too far into to live and shave in la's discography, but the stuff that i have heard was in more of an experimental, free-rock sort of vein. not happening here. this is carefully carved up, collagey experimentation. seeing as how all of the above members are credited on the tape's insert (and when you take the name of the cassette into consideration), this comes across to me as being tantamount to a remix, since i highly doubt that seven people, or six people and a parakeet, took a hands-on approach to the final product that i'm currently listening to. but really, i have no fucking clue. what i do know is that i love it. for sounding like tlasila's catalog ran through several of gaybomb's card readers, replete with the skips and scratches of segments being spliced together, merely resurrected is incredibly musical. the most impressive thing is that it achieves that by completely disfiguring their sound and re-presenting it in a stunning fashion. there are specific parts of tones which are chewed up and then continually spewed back out, subtle, ultra-brief snippets of guitar are snagged, and then repeated until they take on a completely different form, even smith's vocals will be disfigured into milliseconds of stammering gasps for air, while repetitious layer after repetitious layer comes in to provide a rhythmic or melodic foundation as a tapestry of even more dynamic noisy quilting gets pieced together underneath it. it's mind bogglingly schizo, and definitely off its meds, yet it's crafted so bloody perfectly.

from a concrète standpoint, tlasila are at an advantage, since they're plundering from works that are originally musical in origin (like a noise version of john oswald), but anyone could do that (and have it sound like crap). i feel like their enormous success with this tape hinged on a) the seemingly flippant way that incredible passages of music are continually strung together from what, for all intents and purposes is, sheer disorder. b) the ubiquitous sense of control. sure, this is multi-layered and it definitely feels like a lot of shit is happening at once, but never did i get the feeling that something was haphazardly slapped together; the balance between chaos and calculation was just right. c) this one might be the most important: the aforementioned use of layering. those memorable, repetitious patches which served as the groundwork, allowed for the constant cycling of collages underneath it, so that when they brought in new sonic themes, say, a background drone, would overlap into that segment. during this time, they could switch out that drone for a new foundation. i think that the staging of it was brilliant and made for smoother transitions. well, about as smooth as cut-up audio collages can be. tom smith's credited as mixing and producing this, so, if the way that this came out was all him, i've got to tip my proverbial sombrero to the man. if not, y'know, either way, i'm really impressed. very rad tape.

It's like listening to a lost, LSD-damaged DJ Premier mix tape; the motifs consistently imply a sort of MPC-60 style choppy musicality, but Smith never completely gives in, instead opting for jagged, morphing edges and empty noiseways. Samples are arranged in such a way that there's a semblance of a tonal center; a drone in each scène du transmission that focuses the intensity of the frenetic samples. The cuts are violent and acute, but never so freaked out as to induce sonic schizophrenia. In fact, "Merely Resurrected" is deeply meditative at almost any volume; layers upon layers of buried noise detritus and fragment seemingly converge and sublimate at any moment. Both the TLASILA source material and the brilliant arrangement thereof create an aesthetic tension with one another; like a machine controlling a mage, resurrecting and rearranging old magic so that it can deliver its communique from the future. Total creep mode achieved. Highly recommended. 9/10