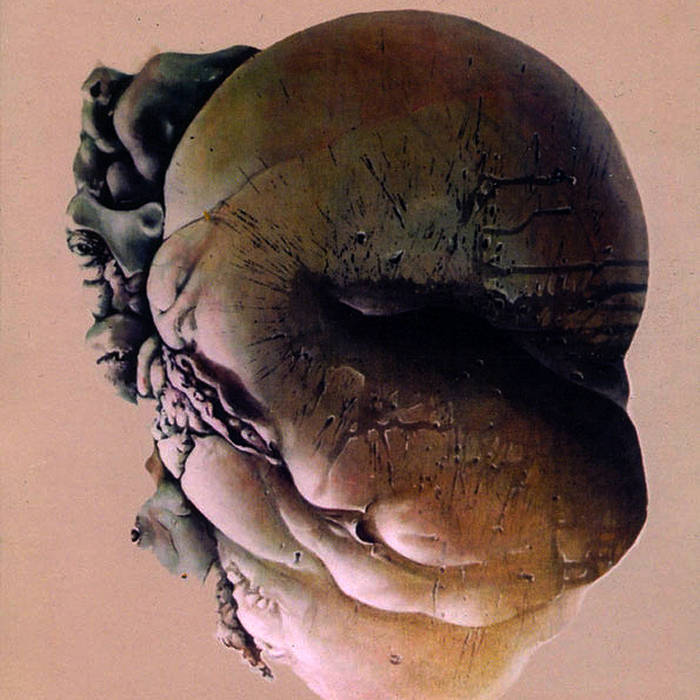 The impossible was within our grasp. We seized the unconscious moment. Ohne 1 was the result.

Tom Smith has said to me that he could never return to the old ways of To Live and Shave in L.A. And by indication of his latest effort, Ohne ‘1’, he isn’t kidding. For this band, Tom teams up with Reto Mader, Daniel Lowenbruck and Dave Phillips. This is a rare record. Not numbers-wise, but rare in the sense that it manages to traverse an incredible amount of terrain yet remain solid and intact. And it’s an immensely sensitive record with sounds embedded in sounds, barking dogs wrapped living in industrial plastic (the kind we’re supposed to duct tape our windows and doors with here in the States), muffled ecstasies, scatological seductions and aktionist shifts. Every song (and yeah…these are pretty close to songs) fits together in a sick tapestry of multitudinous and fragmented depictions of both our baser and our cognizant emotions and impulses. Add to this the billions of colors which bleed across these aural images, illuminating our personal catastrophes, our successes and our vulnerabilities, and you have a sublimely discreet and discriminating document. Cover up nice and warm, because while this record does seem cozy for these fellers, it isn’t without its attacks, beratings, cruelties and batteries. It still bears that concupiscence that Smith has explored in the past with cuts like the 7th song (all titles are simply the initials of the prime writers). On this track, Tom’s lascivious and, er, orgasmic vox is accompanied by a brooding piano, indigo bruises all across our brains, severed and discarded sexual organs thrust at us out of the dark. At times this record is downright astonishing in its care and thoughtful constructions. It’s sly, funny, forthright and brilliant. And while there is outright collision present, the recording seems to be more about thoughtful explorations into disjunctive symmetry. Which may speak to the way in which it was put together. It was built virtually, via files emailed and exchanged back and forth online. The hours and hours of meticulous treatments and syntactical blurs illustrate a deep understanding of how sound, while ostensibly serene and muted, can be disruptive and unsettling. The wit and intelligence with which these songs were built shows a deeper understanding of psychoacoustics. These guys turned a corner; a very sharp and poignant corner.

A truly original work of extremely ugly-beautiful half-assed genius-stupidity, and something that no one can afford not to investigate right now - at the risk of suffering the form of brain-rot reserved for neglected tropical goldfish floating in a bowl. I think this OHNE release comes close to fulfilling the Mego compact, in an unexpected way. my wild supposition is that the label’s founders (Pita Rehberg in particular) always wanted to make a totally absurdist statement, and plumbed for releasing the most extreme examples of digital electronica possible, simply in order to attract attention, piss people off and provoke a strong reaction. needless to say the joke backfired, as soon as Christian Fennesz became identified as the ‘talent’ of the label and praised by all and sundry as a serious artist. the other players in the Mego catalogue - and there are many - tended to be appraised by timid critics in the light of this discovery. the Mego hardcore shock-troops tried to retaliate with such grotesque absurdities as ‘The Magic of Fenn’O’Berg’, Pure’s ‘The End of Vinyl’, Hecker’s reductionist monstrosities, the General Magic pranksterism, and the patently ridiculous naked guitar band Fuckhead. But still the critics raved (myself among them). well, suck on this. maybe this intolerable beast of burden will silence everybody once and for all. belched out from a nameless orifice in the studio by four marginal loons. one of them, Daniel Loewenbrueck, is known to me - he produced an astonishing piece of aural nonsense called ‘Luxury Discreet Surroundings’ in 1999, whose profound meaning-lessness haunts me to this day. Daniel also manages the Tochnit Aleph label in Germany, home to fine noisy wildmen. the other buffoons in this OHNE circus are Dave Phillips of Schimpfluch-Gruppe, Om Myth (i.e. Tom Smith) of To Live And Shave in L.A., and producer of some of the most unlistenable recordings ever made; and Reto Maeder of RM74, whatever that may be. composed mainly of voices of the three performers, maltreated through the mixing desk by Maeder, OHNE’s CD is a perplexing and indigestible mess of incomprehensibility. it’s one of those rare recordings that it’s virtually impossible to remember anything about it, and might even appear to be new and different every time you play it - assuming you’re prepared to air it more than once in your life. it makes no sense whatsoever. wrapped in horrendous sleeve art which might depict an unpleasant object somewhere between a cancerous liver or an aborted foetus (or a malevolent plasticine scultpture which aspires to depict both), this OHNE record presents us things - like these diseased interior organ-viscera elements - which we would rather not know about, the manifestation of bad thoughts which we would prefer to burry in a ditch. the disjointed, random methodology in the editing and the general quesiness of the vile sounds will induce nausea in the listener - I certainly wanted to vomit more than once. no conventional ‘pleasure’ at all, just a big dose of mind-altering and body-damaging weirdness, like chewing on a huge chunk of deep-frozen sick laced with LSD. even the very typeface of the Mego logo has been distorted to fit the band’s name. ‘deal with it, you bastards’, snarls the aggressive press release. now, will everyone finally get the point?

Ohne is like an unstable chemical compound, ready to collapse at any moment. Maybe if the track did crumble to pieces - and lay decomposing for a long long time - it would sound a little like OHNE’s 1. OHNE, a quartet who cheekily copped the MEGO logo for their own band’s branding, go digging through a sandpile of bleeps, clicks, hiccups and fragments of song, scooping it rudely into bags like investigators after a catastrophe. Odder still, a voice like Leonard Cohen’s appears occasionally, slurring a dirge-like commentary. The CD cover pictures what might be some unidentified human organ, but ohne’s sound ultimately suggests the bleakest naturalism ever, a landscape so sublime it would’ve sent Turner lunging for the absinthe.

Full on noise attack from this international ‘supergroup’ of sorts. Featuring ex-members of To Live And Shave In LA, Fear Of God, Sudden Infant and Schimpfluch-Gruppe (who, along with Runzlestirn & Gurgelstock, collaborated with noise giant Masonna a while back on the ‘Arschloch-onna’ disc on Japan Overseas), the group utilizes the human voice as the main source of sound, employing a multitude of electronic manipulations guaranteed to destroy eardrums as well as irritate the fuck out of your neighbors. Totally retarded and highly recommended to fans of the above or those needing a fix for what was once the consistent output of the dearly missed RRRecords of Massachussets. On the newly established Ohne label, a subsidiary of the acclaimed Viennese power electronics tastemakers Mego.

Aggressive ins’t the word - Mars alone knows what is - but it’s a great sprawling, grating, thrashing, electrocuted octopus of NOISZE which pushes you to take it in on its own stark sonic terms. A bit TOO full-on to pull in too many new ears, realtime performance is the best place to sample Ohne’s one-stop apocalypse.