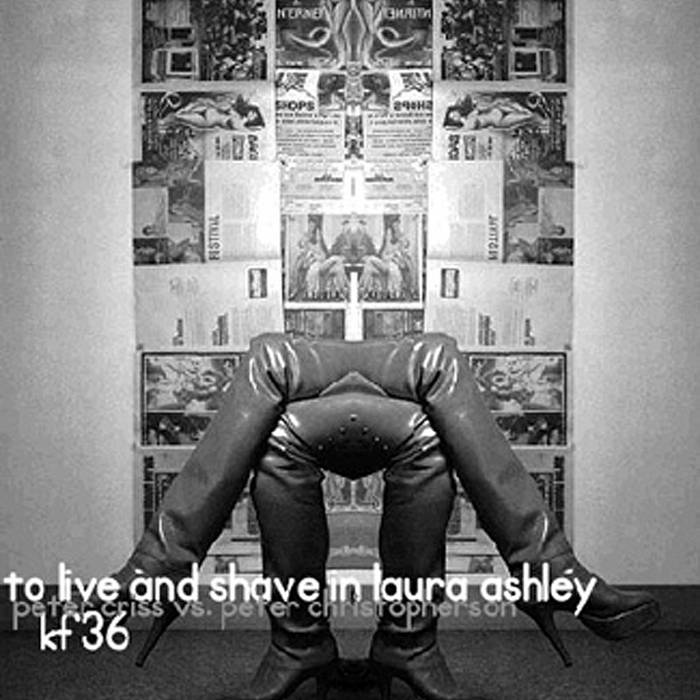 Here's the latest in our continuing series of archival offerings. The chronology is slightly freakin' jumbled, owing primarily to our rapacious mid-to-late 90s fecundity - so many of the albums we created then remain either unreleased or abandoned, or had elements scavenged outright which were later reinserted into other, officially issued recordings, or splintered, distressed, pulled into viscous, mile-wide skeins of malodorous taffy, or disintegrated altogether. (Viz. Horóscopo.)

There's no definitive TLASILA discography, as nothing is ever fixed, cemented into a trophy case or timeline. The raw materials remain malleable, their essential elements unstable, years after "release."

With those caveats in mind, today's confection will likely hew to its nascent organic template for at least a couple more spins. (Actually, that's already untrue, but for the purposes of this presentation...)

To Live and Shave in L.A. / KF36 - Peter Criss vs. Peter Christopherson

Today, Kasra Mowlavi is a successful London-based DJ and owner of the Critical Music label. In 1995, however, he and the other members of the KF36 crew were wreaking psycho-linguistic havoc within European noise cells. Employing (now ubiquitous) swallowed microphones, amplified room tone, home two- and four-track recordings of running water, urine streams, and fuck knows what else, and, most impressively, roots, bulbs, and stalks transplanted from someone's untended collection of East Asian folk arbors, they created an oddly analgesic sub-dialect of sound, a mollifying, absorptive mass almost certainly without precedent, but at the time sounding suspiciously de rigueur. It took a few listens to catch on, but I did, and an invitation to collaborate was extended.

Peter Criss vs. Peter Christopherson was the result. It was begun at The Studio in Miami in 1996, and completed at Atlanta's Microgroove complex in 1998 (following a round of test listens in Chicago with Weasel Walter as we prepared for rehearsals for our ultimately aborted duo project Jaws 3), and released via Phil Todd's superbly spot-ravaged Betley Welcomes Careful Drivers imprint in early 2000 in an edition of 100.

Composed and performed by KF36 / TLASILA.

Mixed and produced by TS 1996-1998 at The Studio, Miami and Microgroove, Atlanta.