The Grief That Shrieked to Multiply 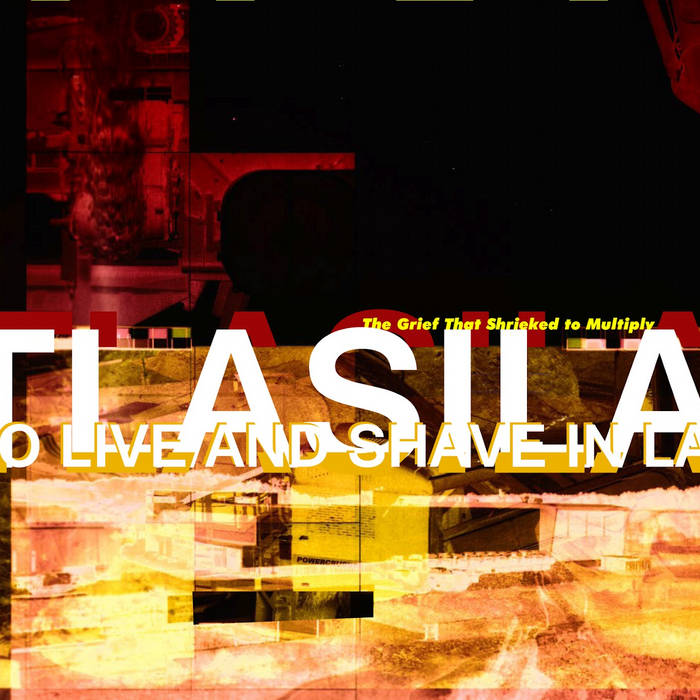 Commissioned by Important Records, executive produced by Blossoming Noise's Graham Moore, and conceived and produced by TLASILA founder Tom Smith, The Grief That Shrieked to Multiply offers an exploded view both of process and mise-en-scène, further delineating the group's disquiet over a slumbering nation held hostage by madmen.

Where the former collection decried American lassitude, the malaise that led to incompetent governance, a catastrophic war of choice, and virulent attacks on civil liberties at home and abroad, Grief turns inward, examining the nation's cancers as they metastasize.

Guest artists will provide layers of perspective through remixing, disrupting, commenting upon, performing over, or in some manner detourning the sound (or intention) of the individualized samples supplied to them.

Important dropped the ball. MonotypeRec stepped in, and the project grew larger. Another year of submissions, test mixes, and trial runs.

Jakub Mikolajczyk from MonotypeRec just sent the latest iteration of the cover and interior sleeve designs for the forthcoming three-disc TLASILA remix collection The Grief That Shrieked to Multiply. It's pointedly garish, avoiding tasteful austerity and, from my POV, evoking the spirit of Corky McCoy's On the Corner sleeve while blasting Rust Belt rail-yards, thermonuclear detonations, and overflowing sacks of Michael Meyers' viscera-flecked candy corn through frayed synapses. A shamelessly livid design. I like it.

It is not surprising that Tom Smith and Rat Bastard's TLASILA project would release such a baffling work as this. Three discs, four-plus hours (more if the bonus downloadable material is included) and more than 60 artists reworking their material. However, Smith took it upon himself to mix the contributions into long form DJ sets, making it an odd and difficult release to listen to at times. However, with the slew of diverse artists represented, both well known and not so well known, the challenge and effort is worth the listen.

The concept behind this release is this massive collection of artists took improvisational recordings from the Noon and Eternity album, as well as isolated tracks from The Cortège and Épuration albums in order to construct their contributions/remixes, which were then sequenced and blended together to create these distinct, disc-long megamixes that are unrelenting in their approach and duration.

Perhaps it is just my own attempt to make sense of this work, but the three mixes seem to have some sort of genre-associated cohesion to them, albeit in the loosest sense. Disc one, My Finger Was Hooked, seems a bit heavier on the harsh noise end of the spectrum. Opening first with RM74's brittle digital noise of "Bones, Beers and Muscles" and immediately followed up with Howard Stelzer's untitled work of fuzzy tape collages, it takes on a noise vibe right away. With the likes of Carlos Giffoni, Aaron Dilloway and 16 Bitch Pileup appearing, it is some heavy players in the world of noise, even if the mixing makes it occasionally hard to tell who is contributing what. For example, I think Dilloway's contribution of "In Memory of Phil Anselmo" is the one full of cut up Thin Lizzy samples with TLASILA material, but I could be completely wrong. Plus, there are some more music moments around, such as the techno stomp and helium voices of Otto Von Schirach's "Cream Pie 2" keeping things weird.

I Offer Syrup embraces more of the conventional world of electronic music as a whole, from Sickboy Milkplus' "TLASILA THAF Remix" sputtering out with canned drum machine rhythms and stuttering breakbeats to Richard Devine’s microsound laden "V2 Mix". To keep things from being overly similar though, both Dave Philips and Rudolf Eb.er appear in this mix to represent the Schimpfluch scene, as does Thee Majesty, who supplies an abstract ritualistic electronic collage.

Finally, I Offal and I Stumble puts a bit more emphasis on the drone artists, with the likes of William Fowler Collins, C. Spencer Yeh and Kevin Drumm all making their appearances within this disc. Of course it does not stick to some consistent plan, with the likes the random junk cut-ups of Evil Moisture and the harsh noise of Torturing Nurse also rearing their distinct heads. Most surprising, however, is a collage/spoken word appearance by Jared Louche, formerly Hendrickson, of Chemlab (one of my long standing musical guilty pleasures from high school). It is not exceptional really, but his appearance alone made me smile.

While I understand this work from a conceptual standpoint, I would have preferred to have seen these contributions indexed individually, as there are a few pieces I would rather listen to multiple times, and others that, while not especially bad by any means, feel more like filler when placed alongside the more unique artists. It is easy to appreciate and enjoy it as is, but I personally would prefer it as a more traditional compilation album rather than the DJ mix setup that it is. But, given the artist responsible for the project, that sort of rewarding frustration is not surprising in the least.

To Live and Shave in L.A. is a cult. What once was a band (founded by ex Pussy Galore Tom Smith) has spiraled into something linked to Thurston Moore, Andrew W.K. and just about everyone engaged in so-called Noise. In addition to a prolific discography (including the terrifically titled Vedder Vedder Bed Wetter and Peter Criss vs. Peter Christopherson), you find Negativland style manifestos, mythology and anti-legislation surrounding "what / why is art?" that almost outweigh the musical message — at least that's what they want you to think. Or something. Honestly, it's hard to wade through the broken links and red herring website the group's Dread Pirate Roberts is maintaining these days. The point is that Smith, with his refusal to say much outside of his extensive art (on politics: "I don't read pop zines for any sort of musical analysis... Bush is a fucking piece of shit... America is wrong... I love music more than anything"), has done a great job at remaining mysterious, hermetic and intriguing — like any worthy guerilla mover and shaker should.

As the sleeve says, The Grief That Shrieked to Multiply is "restructurings of improvisations" of various TLASILA albums (i.e. Noon and Eternity, The Cortège) and "archived material prepared for this collection". By "collection", we're talking over 300 minutes spread across four CD's by artists you may have heard of (Duran Duran Duran, Kevin Drumm, Howard Stelzer, Aaron Dilloway,, Weasel Walter, C. Spencer Yeh, Blevin Blectum) and lesser-known folks that sound made up (Evil Moisture, Krapoola & Noish, Micose & the Mau Maus). And here's the kicker to determine your devotion in this age of MP3 shuffles: each CD is one long track, darned together like a mix-tape on the fly.

Per the nature of the material and players involved, the works incorporate on violence, brutality, bare ambience, awkward dancing, verbal recitation, public service announcement skits, dramatic opera-esque gurgles, spoken word and beyond. For example, on disc two ("I Offer Syrup"), the micro and macro mulching and mangling has no bounds, and the music flits from deep drone to jungle to gabber to electrical hums and sparks to glitch to eerie Hauntology to Dead Machines / Wolf Eyes territories; near 24 minutes, a Theremin sneaks in over a dub bass line to meet an enormous drum loop and both dive into a broken gamelan stutter. But nothing lasts long enough to grip here, as the piece descends into an eardrum-piercing sine wave and tablecore whiz Richard Devine's wall of sounds brand of post-Aphex IDM. Rinse and repeat.

Smith's main posit throughout his career is that genre is obsolete, and he's keen on engaging the listener "with a surfeit of information". Mission accomplished.

When listening to noise, collages, field recordings or other kinds of abstract music, new compilations have always been a welcome listen. Mainly as it is usually very diverse, and for me almost never tiresome. The Grief That Shrieked to Multiply is of course not a compilation as such, but a collection of remixes, done by a big number of well known and some unknown artists from the said scene. Sounds and recordings from the not-belonging-to-any-genre collective of To Live and Shave in LA (TLASILA) are run through the whatever various aesthetic or focal point the individual remixer has. As there are more than 60 various entries over 3 CDs (and one more CD available for download, if you like), it certainly comes out as diverse as any compilation of various artists, and not the slightest bit tiresome, so it works almost in a similar fashion for me.

After listening to the first CD for a while, I realise the tracks are also mixed together, so each CD consists of one long track, making it difficult to work out who is doing what at the time. Not good for the nerd in me wanting to keep track of the artists, but its good that this helps me focusing more on the listening experience. This also makes it almost impossible to not listen to each CD in one sitting, which is a good idea anyway. But it also makes it difficult to play a track or a section over again if you want or need to listen again to just that. I guess TLASILA never wanted to be easy, or easily accessible. However, the aesthetic of this concept makes it worth the while.

But one might wonder, as TLASILA comes out as diverse in the first place, why bother further deconstruction? And do the remixes add to the diversity? I have no idea. I know nothing of what the original recordings sounds like, which is just as well. The remixed set, however, is a collection of rhythmic, non-rhythmic, ambient, noisy, collage, abstract, concrete, improvised, aggressive, house, techno and experimental music, some of it catchy, some much less accessible, etc, etc… The point is, it works. Which matters more.

Issued by MonotypeRec as mono056 as a three-disc set on January 24, 2013. Purchasers of the album could then redeem a download code for a fourth disc of mixes.

From the interior fold of the album's sleeve:

The Grief That Shrieked to Multiply: restructurings of improvisations recorded during the sessions for To Live and Shave in L.A.'s Noon and Eternity album, track isolations from The Cortège and Épuration albums, and archival material prepared for this collection by TLASILA founder Tom Smith.