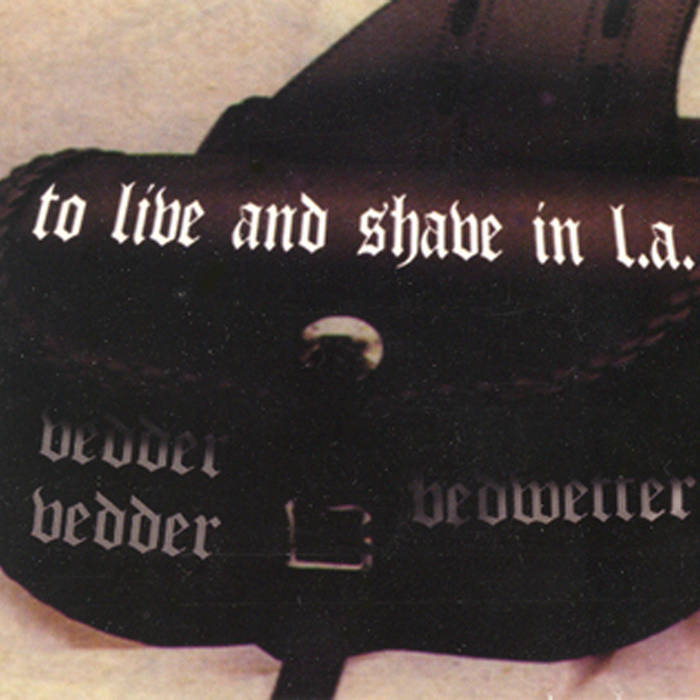 To Live and Shave in L.A.'s first full-length album of 1995, in which my preoccupations with Rashomon, Pound, King Tubby, and (ahem) power-fucking were co-mingled in an ungovernable torrent of splintered hubris. Whatever "full-on insane" you think you have, believe me, we beat you to it, forever.

We’d envisioned VVB as a pitiless, contiguous bombardment. Fifth Column refused to release it without concessions to bourgeois norms (i.e., providing their audience of portly Fetish Night devotees a quasi-comprehensible, oft-demarcated product), and thus the conceit was dashed on the shoals of hubris.

Sleeve design by Syd Garon, unfortunately mangled by Fifth Column’s staff buffoon. Naturally, the physical elements of the original artwork -- including the found Polaroid around which the album's "M. Polk" narrative was spun, and a postcard from a Christian gun shop (!) in Alabama sent to me by Boat Of/Method Actors/Beauty Contest stalwart David Gamble -- were never recovered. (Only the Photoshop files exist.) I’ve grown to accept the FCR version, but the intended sleeve was infinitely more arresting.

Recorded at Waterworks, New York; The Studio, Miami; Lounge Ax, Chicago; Zoot's, Detroit; Local 506, Chapel Hill; The Knitting Factory, New York, and The Green Room, Ypsilanti, from December 1994 to February 1995 by Greg Tallenfeld (Waterworks), Rat Bastard (bass engineering at The Studio), and Tom Smith (everything else, plus a few tracks recorded at Waterworks).